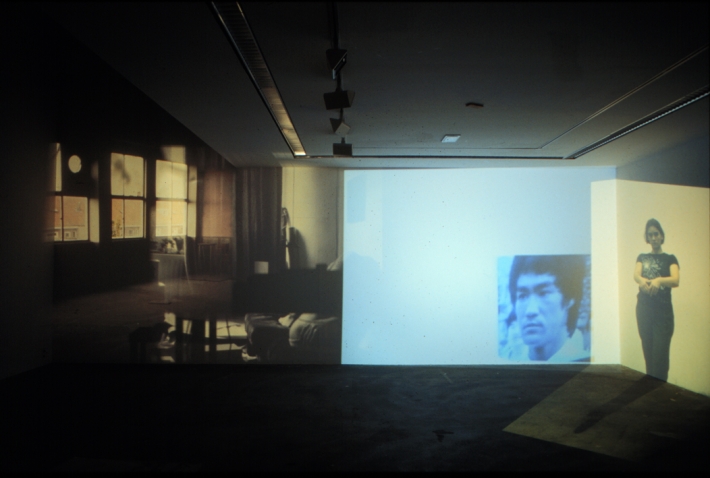 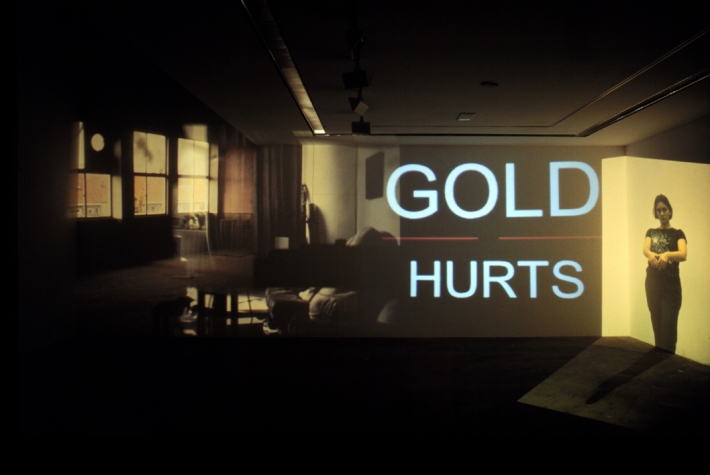 The first version GOLD HURTS I was a live version at the Rijksakademie, Amsterdam, 1998

Bruce Lee, the perfectly moving Kung Fu fighter in the motio picture ‘Enter The Dragon’, dances around his opponent with full devotion and high concentration. With a firm kick, he breaks his opponent’s neck. The silverscreen action hero is one of the main characters, in the installation GOLD HURTS of Wineke Gartz.

In a flow of big size video and slideprojections, the different stages of the artist’s tragic love for her objects of adoration are being depicted. The images are projected on the walls of the exhibition hall, which are occasionally interrupted by mirrors and wooden panels. This creates one kaleidoscopic image, enclosing all space. The spectator is not an onlooker, but becomes an observer from within the installation.

The set is put together like a medieval altar piece and forms a triptych. Foreground and backround, details and overview, present and past, fact and fiction: all are equally clear. The central panel shows fragments of the Kung Fu movie. Left and right, slides are projected of male beauties in advertisement, soft porn, film, art and painting and self portraits of the artist and her interior. She seems to challenge her heroes with sturdy poses, but her eyes betray her restrainted wistfulness. Wistfull about a life: full, rich, and perfect. Restrained because of the confrontation with failure, pain and pretence. On second thoughts, male perfection turns out to be not so untouchable after all. Bruce Lee looks alternating proud and sad, even his cruel enemy seems to be asking for pity. At the height of the fight, a dance song starts with the lyric ‘Everything’s gonna be all right’.

In the middle of so much fragmentation, the observer can conform himself with this Sweetbox cover of the Bob Marley song. In the end are not the differences between Gartz and her heroes that are being displayed, but their simularities.